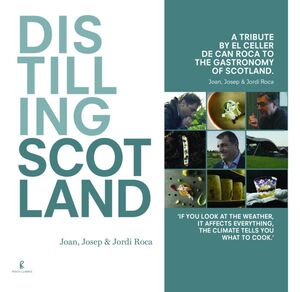 At first, Scotland and cuisine don?t seem to make the most renowned of pairs. So, what was it that made Joan, Josep and Jordi Roca set off on a culinary journey through Scotland? Curiosity!
The insatiable culinary curiosity of the Roca brothers brings them to a country close to Girona geographically, but also culturally exotic when viewed from a Mediterranean perspective. In their journey, the Roca brothers follow two exceptional guides: two travel journals from the eighteenth century; A Journey to the Western Islands of Scotland, by Samuel Johnson; and The Journal of a Tour to the Hebrides, by James Boswell.
The Roca brothers approach Scottish cuisine carefully and tactfully, in the humble and respectful way used when coming into contact with something that is appreciated. They intend to witness, are excited to interpret and want to learn from everything they have seen on their journeys. Product tastings, dishes in restaurants or in the unlikeliest of settings, and conversations with the specialists and enthusiasts they meet along the way have made their mark. After the necessary rest, the ideas for dishes paying tribute to Scotland start to flow in abundance. The forty recipes in this book are a tribute to the excellent products the brothers encountered, a song that tells a tale of tradition and a search for union between these two culinary cultures that are so different: the Mediterranean and Atlantic at parallel 60.